Whether you should clip the wings of your cockatiel or not is a controversial subject. Some think that it cruel to do so. Birds should be allowed to fly. Others would say that it is unresponsible not to clip the wings since this increase the risk of accidents. A clipped bird is less likely to escape or get into other potentially dangerous situation.

In this article; we are going to look at whether you should cut your cockatiel’s wings or not.

What is “clipping” the wings 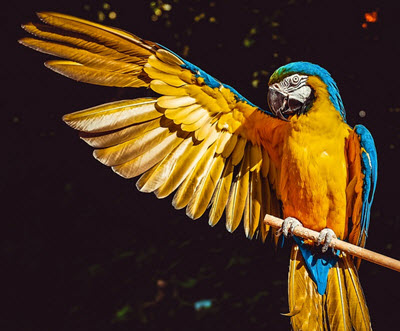 What you do when you clip the wings is in fact that you cut the tips of some of the feathers on the wing. You usually only cut a small section of the feather. You do not remove the entire feathers. Clipping the tips of the feathers reduces the lift that the bird can generate and prevents them from taking off and flying. The bird will not be prevented from doing controlled decent if it falls off a branch. They can just not get any lift. This is true as long as it is done the right way. This is not the case if you cut too much. If you cut too much then you will make the winds more or less unusable.

It is better to cut too little and then cut a little more later if you find that your bird is still able to get lift. Try to avoid cutting too much.

How much of the feathers you need to remove and how many feathers you need to cut can vary a lot between different bird species. On large species, it is often enough to cut the very tip of 3 feathers on each wing to achieve the desired result. You often have to cut more on small birds such as cockatiels. It can be hard to achieve the desired results without affecting how the bird looks.

Learn more about how to clip the wings here.

Does it hurt to clip the wings

Most birds do not like to get their wings clipped. They do not like when a human extend their wings manual. With that said. It does not hurt the bird and the bird will not feel pain. It is like cutting your nails or your dog’s claws.

What tools do you need?

The easiest way to clip the wings of a parrot is to use a pair of scissors.  Scissors reduce the risk that you or the bird will get hurt during the procedure.  Some more experienced wing clippers prefer to use a razor blade, a shavette or a sharp straight razor to clip the wings of their birds.  This gives you more controll but increase the risk of injury.  I do not recommend this unless you know what you are doing.  I recommend that you use a pair of scissors or take your bird to vet to get clipped.

No. Clipping the wings of a bird like a cockatiel is not a permanent operation. The bird regularly replaces its feathers and the wings will be fully restored in about 6 months or so. Can vary between birds. You can cut your birds wings to keep it safe now even if you want to be able to allow it to fly later.

The answer to this questions will vary depending on who you ask. My personal answer depends on what bird species we are talking about. There are some birds that needs to be able to fly to live a full life. There are other species that will live a full life even if they have their wings cut. A good example of this is large Amazon parrots. They spend most of their time walking around in the treetops. They mainly fly to get from one area to another. They spend most of their time climbing and walking. They will seldom fly even if given the opportunity. These birds will not suffer from having their wings cut. A small bird like a finch that flies a lot will suffer from having their wings cut.

What does this mean for cockatiel keepers? The cockatiel is a bird that likes to fly and that covers large distances in the wild. But it is also a bird that is a skilled climber and that can get around well without being able to fly.

I do not think a cockatiel will suffer from having their wings clipped provided they are given a lot of toys and a stimulating cage. If they have things to do then they will be happy walking around. They will not miss flying. I do support clipping the wings of cockatiels to help prevent accidents. If you can provide them with a safe environment where they can fly then you should do so. But most owners are not able to make their home bird proof and cannot watch their bird every second. In this case, it is better to clip the wings of the birds to reduce the risk that they get in trouble. A bird that can fly can get anywhere in an instant. A bird with clipped wing will not be able to get into trouble as fast and you as an owner is more likely to be able to spot problems and save the bird before they get hurt. It becomes easier to make sure that they do not chew wires or do anything else that is potentially lethal.

Cockatiel Foundation - How to keep and care for Cockatiels